Katherine just failed in her quest to repeat the double gold performances of three weeks earlier in Bled when, just over an hour after dominating the double sculls final, she and her crew-mates lost out to Germany in the quadruple sculls final of the second Rowing World Cup, in Munich, Germany. 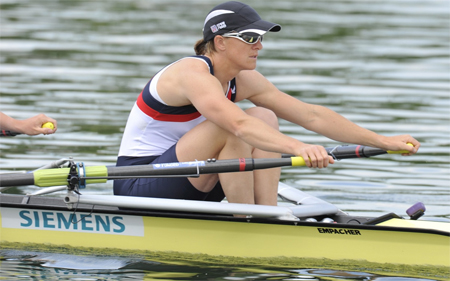 After winning their opening heats in both the double and quadruple sculls events, Katherine and her GB sculling crew-mates looked set to continue their golden run yesterday, especially when Katherine and Anna Watkins led the double sculls final from start to finish.

They went through 500 metres half a length up on Germany and moved this out to a length by the halfway point, when the Czech Republic eased into second place ahead of the Germans.  The British duo then concentrated on keeping the lead they had built, and did not have to produce anything special to cross the line comfortably up.

As had happened in Bled, Katherine and Anna abandoned the double sculls medal ceremony to prepare for the quad final, where they were joined by Annie Vernon and Beth Rodford.  This final started just 70 minutes after the doubles race and, not surprisingly, the British crew were slightly left off the start by Germany, who had a three-quarter length lead by 500 metres.  Despite all the British efforts, the Germans consolidated their lead in the middle part of the race to grab a clear water lead.

However, the British crew did attack in the closing stages and pulled the Germans back, but were still half a length down when they crossed the finish line, to take silver ahead of a fast-finishing Chinese crew.  Speaking afterwards, Katherine said, “we didn’t expect the Germans to go out so fast
but I’m pleased at the way we responded after that”.  She added, “having raced a few times internationally the other crews have begun to know our strengths, so the obvious thing was to attack us off the start. We did everything that we should have done but just ran out of room at the end”.

Speaking about the double sculls final, she said, “We felt we were in control and did what we had to do. Anna was brilliant in the bow seat making all the calls so that we didn’t do more than we should have”.