Katherine added a fifth world title to her collection when, along with partner Anna Watkins, she dominated the double sculls final at the World Rowing Championships, on Lake Karapiro in New Zealand.

Katherine and Anna, undefeated since they came together earlier this year, went in to the final as clear favourites, and they spread-eagled the field to win by the biggest margin of the day,  six seconds ahead of silver medallist Australia, and ten seconds up on defending champions Poland, who took bronze.

This win is the biggest possible boost to Katherine’s 2012 Olympic  campaign as she strives to finally add gold to the three Olympic silvers she already has in her collection.

Katherine and Anna admitted to being aware of their tag as favourites since going through the World Cup series undefeated, but they left nothing to chance at Karapiro.

Katherine explains, “world championship races are liable to be closer and the racing more fierce, and it’s been a while (since we last raced) – all these things come into your mind even if you’ve dominated a whole boat-class.  We were confident going into the final, but very aware that we were going to be attacked from all sides and we didn’t know where the biggest threat would come from.  We knew we should have everything covered, but it’s only in the heat of battle that you find out exactly what you’ve got”.

Thanks to a powerful, smooth start, the British duo had a clear water lead from early on, and talking about that, Katherine said, “once we hit our rhythm, I was pretty confident we’d go the whole way through.  When we moved out, I didn’t think ‘well that’s that over then’ but I did thing we were exactly where we wanted to be”.

For Anna, this is a first world title, and she said, “it’s a privilege to sit behind Katherine and see what makes her so special.  I just try to match up to it really.   I knew we were capable of being world champions, but it’s been so long in the coming.  Each year I’ve gone one better, and I knew this year needed to be the year.  I’ve felt for a long time that we were the best double in the world and today we’ve proved it”.

Crew coach Paul Thompson added, “to go through the whole season undefeated is just fabulous.  Everybody here is talking about New Zealand’s Mahe Drysdale’s fifth gold medal attempt, but he had to settle for silver.  Well, Katherine Grainger’s just done it”.

Below: Katherine and Anna with their gold medals: 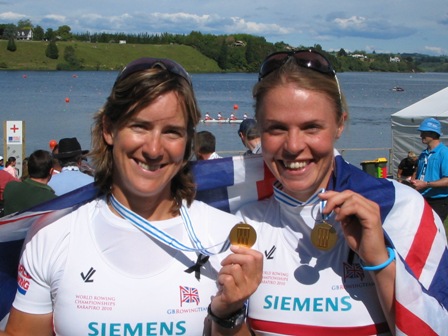