Katherine landed the sixth world title of her career when , along with partner Anna Watkins, she won the final of women’s double sculls at the 2011 World Rowing Championships in Bled, Slovenia. 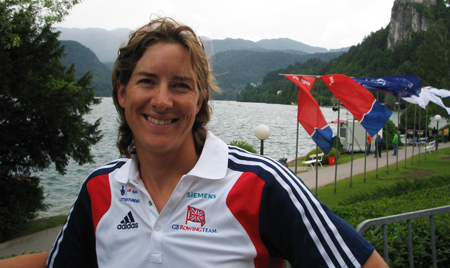 This win means that Katherine and Anna remain unbeaten through the two seasons they have raced together, and incidentally, give Anna her second world gold.

As they have done in every race so far, Katherine and Anna led from the first stroke.  They built a lead of over two seconds by 1500, but were chased down by eventual silver medallists Australian and third-placed New Zealand, who produced the fastest closing 500 metre time of all three crews.  But the British duo had enough in reserve to stay ahead and retain their title.

Katherine and Anna celebrated their win by jumping in the lake before the medal ceremony.

Remembering that their season and preparations had beern curtailed by a back injury to Anna, Katherine said, “this win was sweeter than last year although it was a more challenging race and the margin was much tighter.  We had by far the poorest preparation ever coming into this.  We knew it was going to be tough because the strength of the competition is getting better all the time.  We know that what we’ve got is good enough to make us the best in the world, but you’ve got to execute it”.

She also recalled how it felt as the opposition closed in, “I was smiling in the last hundred metres.  When it’s tough and tight, there’s something inside you that’s loving it, because this is what we work so hard for.  You have to dig so deep, and it’s sweet when you get it right”.  And looking forward to the London Olympics she added, “knowing that we can get that win after the preparation we’ve had gives us a lot of confidence now – next year’s looking good”.