Katherine finally added Olympic gold to her vast medal collection when, along with partner Anna Watkins, she won the double sculls final at Eton Dorney.

And the twelve year wait – which included a frustrating third successive Olympic silver for Katherine in Beijing – ended in front of a packed home crowd who reserved their biggest welcome of the week for her. 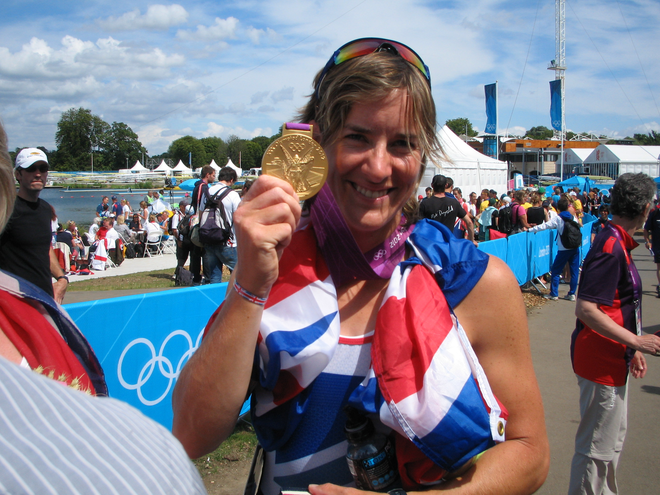 The biggest worry to the British duo were the Australians, but off the start, Katherine and Anna emerged ahead after just ten strokes, and they never looked back. At 250 metres, they led by a third of a length, and this distance stayed the same for the first half of the race. But just before the halfway mark, they put in their first major push, and they moved out to clear water early in the second half of the race. Another push around the 1300 metre mark kept the Australians and the rest of the field in their wake, and the British double had the luxury of sitting clear all the way to the finish line.

In Beijing, Katherine and her quadruple sculls crew-mates took silver in tears of frustration. Yesterday at Dorney, it was tears of joy as the national anthem played for the second time of the week at the rowing venue.

Afterwards, Katherine said, “ever since Anna and I got in the boat together, we knew we had the potential to be the best in the world. For us, it was really about living out that potential, and once you know you have it, it’s about realising it. For us, delivering in front of a home crowd, in front of a home Olympics, was what we set out to do, and we knew that if we’d achieved that then we’d have done something very special”.

About the race itself, Anna said, “I knew we’d won it just before halfway. Once we got out to nearly a length and we were still moving away, we were pretty confident. But in the last 100 metres and with the crowd there, there was just no way anything was going to go wrong. It was just about getting each stroke right one at a time, and we had time to enjoy it”.

Asked after the race what the future held, Katherine said, “we’re both very aware that today was massive and we were going to have the race of our lives, so we haven’t thought beyond it – we don’t even know what we’re going to do tomorrow. Once we get this result out of the way, we’ll look forward, but we haven’t made any plans. It was very important for us to live for the moment. I honestly don’t know what will come”.

Katherine and Anna spoke to the Press Association at Team GB House later that day.